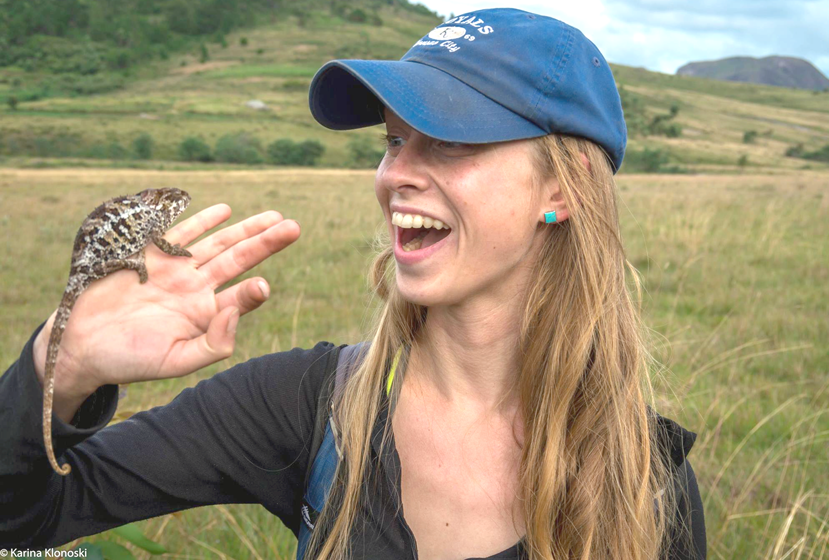 “The fleas have burrowed into your feet to lay their eggs,” Hollondaise informs me with a smile. As he kneels before me, he carefully inspects my bare feet, scraping off some of the tiny insects. Hollondaise explains that while these fleas are common in this part of Madagascar, they typically only burrow into feet around the nails, since most local people have hardened soles from walking barefoot. Unfortunately, the soft bottoms of my feet offer no such protection. Hollondiase laughs in a joyful manner as he finishes removing as many of the unwelcome creatures as he can.

I’m in Madagascar, picking fleas out of my feet in the rainforest nearly 11,000 miles from home, in search of the brilliantly colored, poisonous Mantella frogs. Mantella frogs, found only in Madagascar, have highly variable skin color, ranging from red to yellow to black with bright orange patches. These vibrant colors are thought to warn predators of the frogs’ toxicity, though in reality scientists know little about the frogs and even less about their complex color patterns. By finding and collecting samples from these beautiful and rare frogs, I am working to learn more about the evolution of their colors and poisons.

Finding and catching a nickel-sized frog in a vast rainforest is about as difficult as it sounds. Before coming to Madagascar, I trained myself to learn their calls by religiously listening to recordings. Now, after several field seasons, I can easily detect them in the noisy jungle. Luckily, I also have help from a local guide named Hollondaise, a Malagasy man renowned for his frog catching skills.

We’re quiet as we listen for the frogs’ distinct chirps, and finally we hear a cascade of calls in the distance. The sound points us to the general location of the frogs, after which we begin a frantic chase to find the tiny flashes of color amid the leaf litter that coats the forest floor. The once-charming frog calls quickly become a maddening taunt. Crawling on the ground, I begin to close in on a frog, but he retreats to a small crevice just beyond my reach. There’s nothing to do but wait. Experience tells me that the frog will eventually emerge from his hiding spot long enough for me to grab him. Frustrated, I take a seat next to the tree trunk.

The frog eventually comes out, and I catch him and many others before hiking back to our basecamp. There, we spend the next eight hours collecting samples from the frogs in a makeshift lab constructed from tarps tied to trees. We work well into the night, using headlamps that simultaneously illuminate our workspace and attract swarms of mosquitoes to our faces. We collect genetic samples, descriptive information on frog coloration, and samples of the poisons on the frogs’ skin. Using this information, I hope to better understand how and why this group of frogs is so diverse in color and pattern. These data can help us determine whether brighter frogs are more toxic, or if genetically similar frogs are also more similar in color, pattern, and toxin composition.

Over the course of the next two months, I’ll visit many locations throughout Madagascar to gather samples from poison frogs. Afterward, I’ll pack my samples securely in suitcases and transport them back via a 23-hour flight to Berkeley, where I can begin my analysis. It’s difficult, painstaking work for the sake of small pieces of information. And what I learn won’t change the world. But for me, discovering something new is incredible in its own right.

Karina Klonoski is a graduate student in environmental science, policy and management.

Featured image: Karina interacts with a variety of wildlife, including this chameleon, near one of her field sites in central-eastern Madagascar. Photo: Richard Klonoski