A new phase in electron microscopy

The word “electron” invokes a picture of a sub-atomic billiard ball, a particle that jiggles about, colliding with matter around it. On the other hand, light is often pictured as a wave, a collective of oscillating peaks and troughs travelling through space. Before the formulation of quantum theory, this so-thought sacred dichotomy between waves and particles defined much of our physical intuition. We now know, however, that light and electrons can behave as both particles and waves. This quantum leap in our understanding has unlocked a bevy of potential applications that harness the wave-like properties of electrons. Electron microscopes, in particular, can magnify several thousand times more than light microscopes, enabling angstrom scale (10-10 meters) imaging of single protein molecules. Recently, a team of researchers at UC Berkeley led by Robert Glaeser, professor 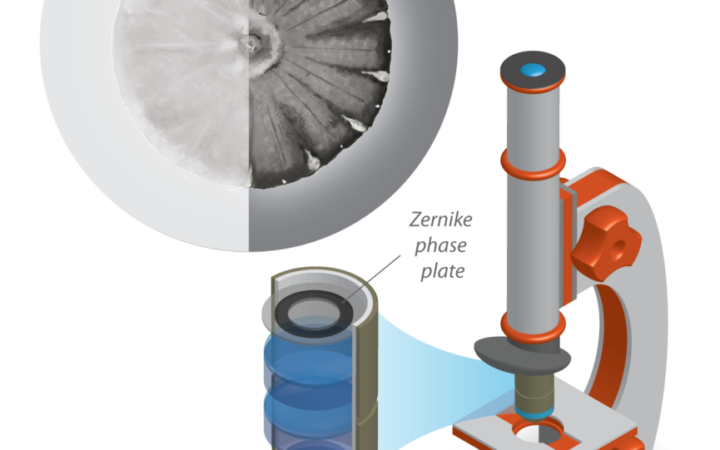 (emeritus) of molecular and cell biology, and Holger Mueller, professor of physics, has extended the capabilities of a commercial electron microscope by realizing phase contrast imaging with electrons.

Microscopes operate by directing a beam of light or electrons towards a sample of interest. The sample scatters the beam into a collage of waves that are meticulously assembled by lenses to form a magnified image. For thin, unstained samples that weakly scatter the input beam, conventional microscopy cannot render the finer structural details. This limitation is because the small variations in amplitude or brightness of the scattered beam are painted over by a uniform input beam. However, in addition to an amplitude change, the sample can also leave a strong signature in the phase, or synchronization, of the scattered wave. To image the phase contrast is to detect the difference in synchrony between the input beam and the scattered beam, or the delay between the arrival of peaks of one wave relative to the other. The challenge, however, is that the detectors, much like our eyes, are sensitive only to the amplitude of a wave.

In the 1930s, Fritz Zernike surmounted this problem for light microscopy by using a phase plate (a glass disc fabricated to precisely modulate the relative phase between the input and the scattered beam) to translate phase information into an amplitude signal. For over half a century since then, researchers have looked for a similar phase plate for electron microscopes. However, electrons, being charged objects, are more difficult to control than light. There have been multiple attempts to make electron phase plates using “magnetic fields, electric fields, and materials. But most phase plates degraded over time due to the buildup of charge from the electron beam,” says Dr. Osip Schwartz, a postdoctoral researcher in the Mueller group. Furthermore, their performance has been unpredictable making them impractical for routine use. 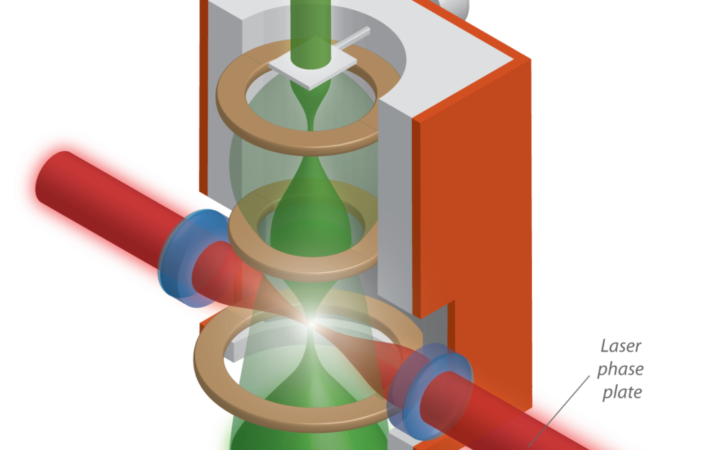 The Berkeley team has pioneered a new kind of phase plate by tightly focusing a high-power laser in the path of the input electron beam. At 200 gigawatts per square centimeter, their system is the highest intensity continuous laser system in the world with 100 atmosphere radiation pressure at the focal spot. This laser is 500,000 billion times more intense than a desk lamp. Such high intensities are necessary because the electrons are directed towards the sample at speeds close to that of light. This speed limits the time of an already weak interaction between photons and electrons to only a few femtoseconds (10-15 seconds). As a first step, the team has shown controlled phase change induced on the electron beam due to interaction with the photons from the laser. For Glaeser, a veteran in the field of electron microscopy, the achievement is a culmination of a pursuit spanning decades.

Adding to the active field of laser control of atoms, this work is the first demonstration of laser control of free electrons and has garnered the excitement of the scientific community at large. The next step is to test the performance of the device using a well studied sample such as hemoglobin, a protein found in red blood cells. According to Dr. Sara Campbell, a postdoc in the Mueller lab, the final chapter in the story would be to make the device a routine tool capable of functioning at the press of a button. “One can draw inspiration from what Zernike phase contrast has done for light microscopy,” she says. Mueller agrees with her enthusiasm: “If you can make a new instrument that many people can use, you will be indirectly helping scientific discoveries.”

Prabudhya Bhattacharyya is a graduate student in physics

This article is part of the Fall 2019 issue.