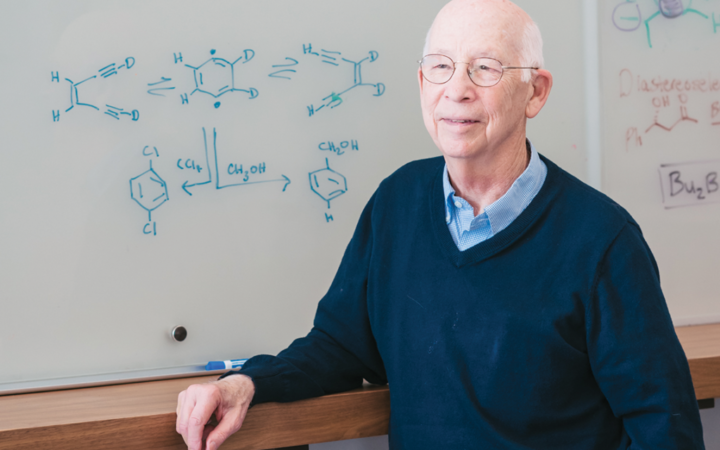 On the first day of graduate school, I went to my physical organic chemistry class feeling nervous and intimidated. The class was taught by Bob Bergman, a chemist whose extensive scientific record and research contributions I had learned about as an undergraduate. Many professors who excel at research are, unfortunately, not good teachers, so I had no idea what to expect. In his first lecture, Bergman played a movie of his young granddaughter experimenting with a saltshaker, and he explained how excited children are about figuring out how things work. As graduate students, our years of prior education had trained us to practice for high test scores and GPAs rather than learn to satisfy our innate desire to understand the world. Bergman hoped to reawaken our curiosity and joy in learning. Over the course of the semester, I believe he did just that. Bergman has been a pillar of the Berkeley College of Chemistry for decades, as well as an extensive contributor to science outreach in the local community. He helped start the Bay Area Scientists in Schools (BASIS) program—which brings local scientists into public elementary school classrooms to help with hands-on lessons—by recruiting graduate student volunteers. Over the last 20 years, the program has grown to include over 500 volunteers inspiring young students to creatively solve scientific problems. Speaking with Bergman, it quickly became clear that he doesn’t see being a scientist and being a teacher as mutually exclusive careers—he sees them as complementing each other. In his words, “people who stop learning can’t imagine that they’re going to continue to be good teachers.”

AB: What motivated you to pursue a career in chemistry?

BB: You know, I’m not one of these people who was blowing up things in his basement from age five. I had a chemistry set, but it wasn’t something that I was suddenly fascinated with. My high school chemistry course was terrible! I went to public high school in Chicago, and I had a lot of good teachers, but [my chemistry teacher] used to come into class and put his feet up on the desk and talk about his vacations in Wyoming. And the textbook was really very dull. So I suppose you could say that the fact that I became a chemist must mean that I was really attracted to the field, given all the potential for turning me off. My main extracurricular activity, both in high school and college, was that I worked on newspapers. I ended up being editor of the newspaper at Carleton College, where I got my bachelor’s degree, and in those days—the late 50s, early 60s—I got myself into a fair amount of trouble writing editorials that the administration wasn’t very fond of. So I actually thought about becoming a professional journalist, and I can’t really tell you what it was that made [me decide to become a scientist], but it probably was the research. I did research in my senior year [of college] with a young guy named Pete Scheiner who had just come to Carleton as an assistant professor. Pete was a classic New York kid, and he was totally a fish out of water in Minnesota, he just hated it, so he only lasted a few years. Fortunately, one of those years was while I was there, and I got to do research with him. [That experience] sort of convinced me, so I decided that I was interested enough to go to graduate school.

AB: You must have made the right decision because you’ve been in the field for your entire career. What is the primary motivation for your work?

BB: I really do believe that the major advances in almost every field of science have come without the investigator knowing what the payoff is going to be. If I think back to the kinds of research choices I’ve made, they’re almost all choices that are motivated by the thought: “this looks interesting—let’s find out what’s going on here.” In retrospect, the kinds of things I felt were important were almost all situations where I was trying to understand a field and investigate the limits.

AB: What research contributions are you the most proud of?

BB: Probably one of the most important discoveries of my early career was the discovery that you could make parabenzyne just by a thermal rearrangement of an enediyne [a unique reaction that changes a molecule’s geometry]. There were a lot of people interested in making molecules that tested the limits of aromaticity [shared electrons throughout part of the molecule], so that was what I was interested in doing at the time. I just happened to think of a potentially simple way to generate parabenzynes, and I had to talk a graduate student

named Rich Jones into trying these experiments. There was no hint or thought in my mind that there would be a practical payoff It took 13 or 14 years before somebody figured out that this reaction that was part of these antibiotics that were cleaving DNA [to fight infection]. So I think that discovery is a good example of [doing research for curiosity’s sake]. 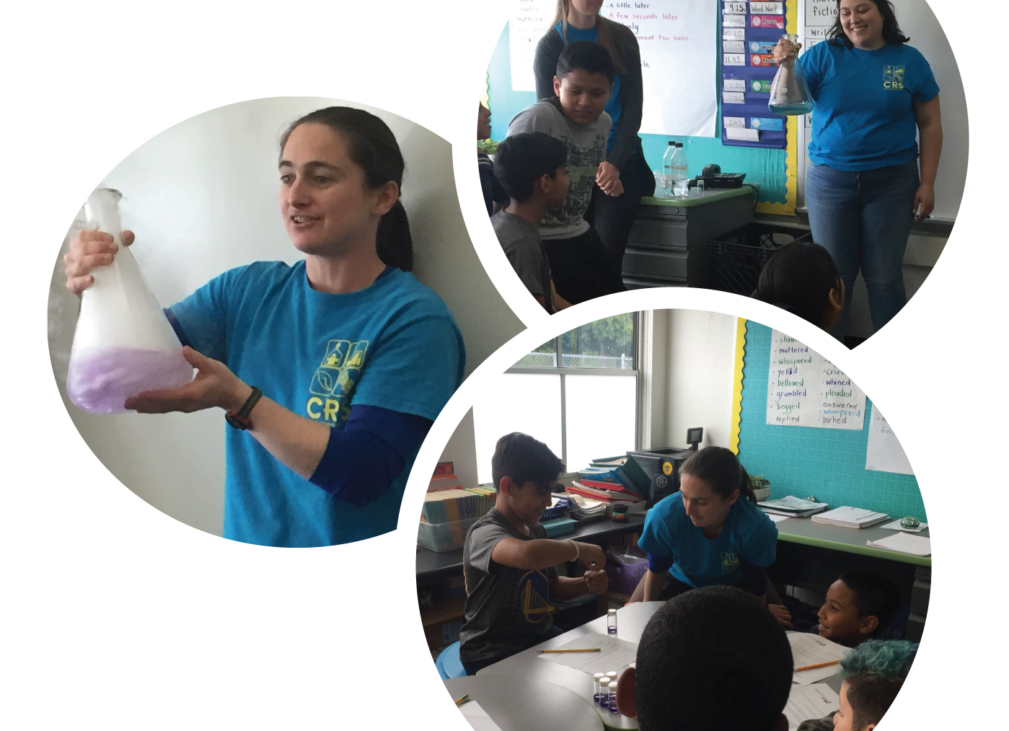 UC Berkeley graduate students teach elementary school children about acids and bases through the BASIS volunteer program, which is coordinated by Community Resources for Science (CRS). Bergman initially helped recruit graduate students and post-docs to the BASIS program and is on the CRS board of directors.

AB: Alongside your scientific achievements, you have also been very involved in community outreach through the BASIS program. How did you get started with that?

BB: It was completely accidental. I went to a party that was given by some of the people that my wife Wendy went to graduate school with. This was in the late 1990s—right about the time that the two people who started Community Resources for Science (CRS), Nicki Norman and Anne Jennings, were in the process of getting that program off the ground, and their goal was to somehow get more science in the local schools. They were trying to find some people who would be willing to give science presentations to the students. Corinn Brown, one of the people who was working with them, asked me if I could round up some graduate students to give these presentations, so I sent an email to literally all the grad students and postdocs in the department. Twelve people showed up—it was a mix of grad students and postdocs. So it started with that, and then it really grew, almost completely by word of mouth. At some point in the mid 2000s CRS actually asked me to be on the governing board, so I have spent several years doing that.

AB: Could you compare your experiences between working with elementary students and college students?

BB: I don’t think it’s so different. There is obviously a huge difference in background, but I think the things that motivate students at any level are pretty much the same. Everybody likes to see things crystallize! Everybody likes to see things blow up! And while that’s a pretty superficial motivation to do anything, it’s one that really has fascinated all of us. What happens in the classroom when you’re doing a BASIS presentation really has to do with kids trying to find out how to figure out things. The thing that really gets them involved is, “here’s a problem, how do you solve it?” You can do that at the elementary level and at the graduate level. People say it’s not rocket science, but in a way, it is. Rocket scientists have to do the same thing.

AB: How has your teaching style evolved through the years?

BB: I didn’t always get up in the first lecture and explain my educational philosophy to students, but I started to do that because I wanted people to understand why we were doing what we were doing in the class. I also wanted people to know that I think that competition is fundamentally not a good thing, and the way I tend to grade this course was that everybody was going to get an A or a B. Trying to make my expectations clear is one way that I’ve changed.

AB: What advice do you have for future scientists and educators?

BB: I get asked that a lot. Students ask me what I think they should do, and I think everybody has to make their own decision. But one thing I think is really true is that if you don’t like what you’re doing, it will be very hard to do anything meaningful in your professional life. So you have to love it! Especially in science—talk about delayed gratification. People work really hard, with

sometimes very little gratification, until they finally solve a problem or achieve whatever they’re trying to achieve. And that’s a very subjective thing. Nobody can tell you, you ought to do this thing because it’s really important, even if you don’t like doing it. If you don’t like doing it on a day-to-day basis, if you hate running chromatography columns, you should not be an organic chemist, no matter how important you think it is. I think that’s what’s important about choosing something that you want to do for the rest of your life: it has to be something you really love.

Amanda Bischoff is a graduate student in chemical biology

This article is part of the Fall 2019 issue.