Perseverance, Brilliance and Charm: An Interview With Mary Gaillard 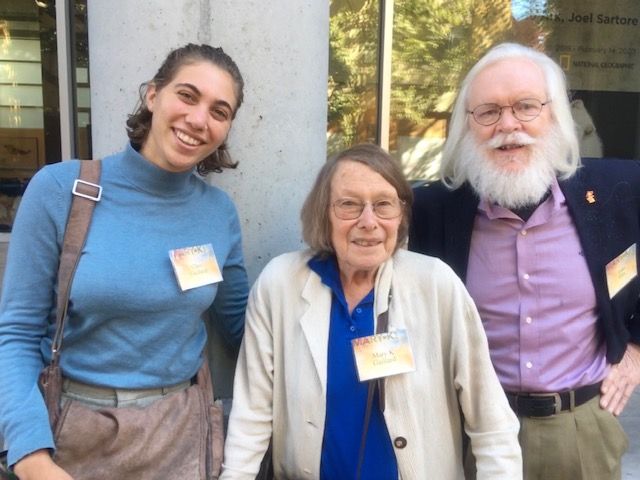 This article is part of STEMinism in the Spotlight, a monthly interview series.

Mary K. Gaillard is an extraordinarily accomplished physicist. In 1981, she became UC Berkeley’s first tenured female physicist. She is currently a UC Berkeley Physics Department professor emeritus and professor of the graduate school.

She received her BA in physics from Hollins College in 1960. During college, she spent two summers at Brookhaven National Laboratory (BNL), which encouraged her to continue her studies in Physics. From Hollins, she attended Columbia University for graduate school in physics. She left in 1961 with an MA and moved with her then-husband to France. She earned a “Doctorat du Troisième Cycle” in 1964 and a “Doctorat d’État” in Theoretical Physics in 1968 from the University of Paris, Orsay. Before she moved back to the United States, she was a visiting scientist at The European Organization for Nuclear Research (CERN) for almost 20 years.

Her research focuses on particle physics. Perhaps her most notable accomplishment is that she predicted the mass of the charm quark in 1975. She is also the author of A Singularly Unfeminine Profession, a memoir that details her research as well as her life experiences.

Amanda Glazer (AG): What specifically was it about Physics over any other mysteries of the world that drew you to it?

Mary Gaillard (MG): I actually didn’t take physics until I was a senior in high school. I liked math, and I was good at math. Physics is the most mathematical of the sciences but with a connection to the real world. Math is very abstract. It’s beautiful, but I wanted something that connects to what we observe.

AG: How have you seen the real-world connection in your work?

MG: Well, I predicted a mass of a particle [the charm quark]! What I mean by the real world is not what we can see in this room, but understanding the structure of nature.

What are some of the accomplishments you are most proud of?

It must have been in the 1960s or early 1970s, experiments at Stanford’s SLAC observed that when we smash an electron and a positron together, you produce strongly interacting particles that come out back-to-back. Those particles are interpreted as reflecting a direction of the quarks that underlie them. In other words, you’re really producing a pair of quarks, but we don’t observe the quarks so they turn into the kind of particles that we observe. What we predicted was that at higher energies you should also see a third set which corresponds to a gluon. Do you know what a gluon is?

Well, it’s basically like in an atom, where you have electrons that are bound to protons by exchanging photons. Inside a hadron [a composite particle made of two or more quarks] the quarks are bound together by exchanging gluons.

What are some of the current things you are working on?

Well, I’m working on something called “supergravity.” There’s a theory called “supersymmetry” which was invented by my husband, Bruno Zumino, and his collaborator. It predicts that for every particle there is a partner particle. It solves several problems. It could be the dark matter. People expected it to be discovered at the Large Hadron Collider or the Super Collider because if it had a low enough mass it solves some conceptual problems in physics. But it wasn’t found at that mass. But anyway, it still may be true. If the world is supersymmetric and gravity couples to everything, then the graviton, which transmits gravitational interactions, should have a super partner as well, and that’s supergravity. We don’t know how to treat gravity in the context of quantum mechanics because it has weird properties. Supergravity is easier to manage because some things that give you infinite amplitudes, which you don’t like, infinite probabilities, they get cancelled. It’s a much more well-behaved theory, and that’s the motivation for working on it.

How much chance do you feel like there was in you ending up in theory over an experimental group?

The funny thing is, I thought I was going to be an experimentalist. I was better at theory in a way. I knew I was better with equations than I was with fiddling with machinery, but everybody just assumed I’d be an experimentalist. It was very hard, when I was young anyway; it was considered extremely hard to be a theorist, and you just didn’t go into theory. Especially if you were a woman, you just didn’t get into the business at all. Then when I moved to France, I went to every lab in Paris and they all refused me. The first thing they told me is that I’d never get into the theory group. A friend of my husband’s told me this. It wasn’t a put-down, it was just sort of a statement of fact.

Because you are a woman?

No, just because it’s too hard. Nobody gets into theory group. So, I was turned down by all these labs. They just had the beginnings of a graduate education, but I took those courses. I did well on the exams and they took me in the theory group.

You did like the theory more to begin with though?

I did like it more, but I just didn’t think it was a realistic expectation to become a theorist.

I’m very curious about the relationship between experimentalists and theorists. It seems like they are all working towards the same goal, so why even have the distinction?

In the beginning of the last century, people like Fermi were experimentalists and theorists. As time went on, the experiments became huge and complicated and you had to know a lot of details about complex apparatus and analyzing data. The theory also became more complicated, and so it just became very difficult to master both.

Do you think things would have been different if you’d stayed in the United States instead of moving to France?

If I’d stayed in the United States, I don’t know what I would have done. As a graduate student at Columbia I probably would have done an experimental thesis because that was what was expected. When we got there, we had this orientation for the incoming graduate class. The first thing we were told was that only one out of three of us would stay in the field at all, and don’t even think about becoming a theorist. Those were the messages we got.

How did the Physics culture differ between the US and France at that time?

When I went to Columbia, maybe there were about two women in my class of about 60 people. There were very few women, but you didn’t have the impression that they didn’t take you seriously, as a woman. They probably assumed, “oh you’re going to drop out and get married,” but they didn’t put you down. I mean, I got a lot of put-downs when I got to France. That didn’t happen to me at Columbia.

How did your work change when you came to Berkeley?

My work changed partly because physics changed. There was a lot of data in the 1960s and 1970s, and that’s when the Standard Model was developed. Since then we’ve had very little data. My work used to be very close to experiment, but now it’s not so much. It’s more theoretical. It’s more speculative. Just because there’s no data, so it’s changed.

What do you mean that there’s no data?

Well there’s data in high precision, low energy experiments. For example, experiments that are low energy but have particle beams which are very intense, so you get a lot of events. These experiments study rare processes at low energies, so there’s some data there. There’s a lot of data in cosmology. But not in traditional, high-energy physics, asking questions like what’s the next particle to be discovered, that kind of stuff. I lobbied very hard for what was called the “Super Conducting Super Collider.” It was supposed to be built in this country. Then that died and they built a large hadron collider which has lower energy but it’s going up. So far, they have discovered the Higgs particle which kind of completed the Standard Model but nothing else, and so there’s no guidance from experiment.

So this is a direct result of the need for another collider?

I mean there are projects but they are a long way off.

There must be a lot of work advocating the government to fund these things. How hard is it to communicate physics to people outside of physics, like in the government? It seems it would be a challenge.

It is a challenge. For example, cosmology is much easier because you show all these beautiful pictures. Yeah, it is a challenge. Congress used to be better educated. Everybody used to be better educated. Back in the late 1980s, early 1990s, there was a big push to elect new people. There were a whole lot of freshman congresspeople. There were people who had been on these committees for years and understood something about why it was important to do fundamental science, and a lot of those people got kicked out and got replaced by young guys that didn’t know anything.

What could help with that?

How has female mentorship shaped you and impacted your own mentorship? In college you mention Dorothy Montgomery being a great mentor, arranging opportunities for you in Paris and encouraging you to apply to the BNL.

Well, I had a college physics teacher who was a strong role model. But then in graduate school and later, there were very few women. I didn’t really think about it, but at some point, I started becoming aware that I was a role model. I remember once there was a young postdoc giving a talk here and she asked me if she could come talk to me. I said sure, and we chatted and we chatted, and after a while she said, “you’re so nice!” I said, “why wouldn’t I be?” Now I’m much more conscious than I used to be. I try to be more active and more responsive to women.

They just had this conference for me, and the organizer really made a big effort to get a lot of women speakers and especially young women speakers. That was very nice. You hear all these women speaking, and the talks are excellent.

Before that, about a year ago, I was at a conference in Germany for women in physics. There were some talks about women in physics as a topic, but there were a lot of talks by women about physics. It was amazing. When I lived in France, I traveled and gave talks a lot, and I spent a lot of time at CERN. Germany was the worst place in Europe for women. So, it was so nice to go to this conference in Germany and see all these young women who are doing well.

How have things for women in physics changed over the years?

Oh boy. I was on the American Physical Society Committee for Women in Physics, and everybody kept proposing the same things and nothing ever happened. I got kind of burned out. But still I think what is mostly changed is society. In the sense that, when I was young, most women were housewives, but now most women work. Most of my colleagues have professional wives. They may not be in physics, but they are in some kind of profession, and the whole attitude towards women has gotten much better because of it. Because society has changed.

There still are conscious efforts to make sure, for example, prize committees, hiring committees and so forth, have women. So women’s voice gets heard.

Any last piece of advice to people getting their science education and learning physics today?

If you like it, do it. Don’t let anybody push you down or try to discourage you, just brush them off.