The sun and earth are separated by millions of miles of vacuum. Yet, life on earth depends on the ability of the sun to transfer energy through this vacuum and heat the earth to habitable temperatures. This heat transfer is possible because electromagnetic waves from the sun travel through vacuum and deposit energy onto the earth, a process called radiation. In contrast, our everyday experience with heat transfer between solids relies on the mechanism of heat conduction. Heat conduction arises from the transfer of vibrations. Any solid object at a non-zero temperature is constantly, spontaneously vibrating at the atomic scale. The typical amplitude of these vibrations is set by the temperature. When a hotter object comes into contact with a colder one, vibrational energy from the hotter region is transferred to the colder object, causing it to warm up.

Since the advent of modern thermodynamics, it was believed that radiation was the only way that heat could be transmitted through vacuum, since conduction was thought to require a physical medium to support vibrational waves. Now, a new experiment from Berkeley Professor Xiang Zhang's lab in the Department of Mechanical Engineering has shown that, at least over short distances, heat conduction through a vacuum is possible.

This stunning result, which upturns hundreds of years of conventional wisdom, relies on the fact that the vacuum is not quite as empty as it appears. Quantum mechanics demonstrates that a vacuum is empty only on average. There are quantum fluctuations where photons, the particles associated with the electromagnetic field, pop in and out of existence. As a result of these fluctuations, the vacuum contains intrinsic energy known as the zero-point energy. Ordinarily, the zero-point energy is not observable, but by straddling a region of vacuum with metal plates, it turns out that the zero-point energy between them is modified relative to the space outside. This difference in energy, known as the Casimir effect, has dramatic physical consequences.

Theorists had recently recognized that the Casimir effect could mediate the transfer of heat from a hot object to a cold object through the vacuum via bona fide conduction. The thermal energy contained in the vibrations of the hot object could be transferred through the vacuum directly into thermal vibrations of the colder object. However, physicists had yet to observe the phenomenon.

In order to observe the Casimir effect, the Zhang Lab had to overcome many experimental challenges. Two small ceramic plates 0.3 centimeters in length, one heated about 20°C hotter than the other, were placed in an artificial vacuum. Since the strength of the heat conduction in vacuum is proportional to how close the two plates are together, every effort had to be made to make the distance between the plates as small as possible, and to keep it constant while the temperature of the plates was being measured. Dr. Hao-Kun Li, a lead author on the study and a former graduate student in Zhang’s lab, describes the effort: “We had to build, from scratch, a setup to bring two mechanical membranes as close together as 300 nanometers [apart] using both electrical and optical interference methods.” (That’s nearly 1000 times smaller than the width of a human hair.) 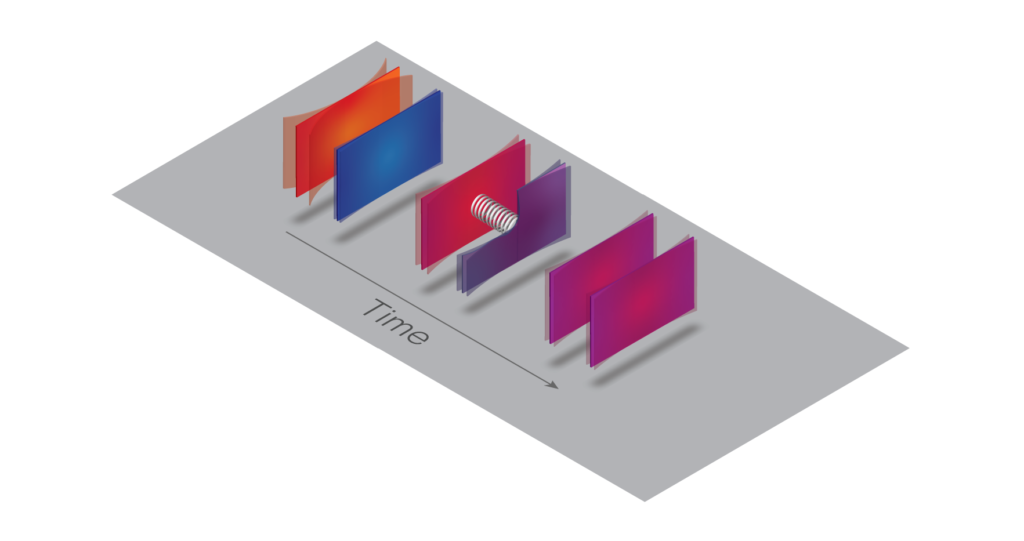 When a hot micromechanical plate is brought near a colder one in vacuum (left), fluctuating quantum fields give rise to a spring-like mechanical coupling between them (center). This coupling allows thermal energy to conduct until the two reach the same temperature (right). Image Design: Gautam Gunjala

To achieve precise positional control, the Zhang Lab used an innovative technique: reflecting lasers off of each plate and measuring the resulting interference to precisely adjust their orientations. These lasers were also used as indirect thermometers to provide a precise measurement of the vibrations of the plates. This latter capability was key to allowing the researchers to observe the heat transfer with a relatively large separation.

With their novel experimental apparatus, the Zhang Lab was able to accomplish what other groups had failed to do and measure a temperature change in the plates that was undeniably due to heat conduction through the vacuum. The demonstration of this effect opens up numerous avenues of future research in thermodynamics. In particular, the dissipation of heat “is a key factor that limits the size and speed of electronics,” Dr. Li says. “What we found is that instead of engineering materials, one can engineer the vacuum.” With further improvements in the way the vibrations in materials are able to couple to each other, vacuum conduction may become an important tool in the design of nanoelectronics. At the very least, the discovery of an entirely new mechanism of heat transfer shows us that the quantum world still holds mysteries waiting to be uncovered.

This article is part of the Spring 2020 issue.