Einsteinium, an element discovered in the fallout from the first hydrogen bomb, is not your everyday chemical reagent. It is highly radioactive, constantly decaying into other elements, and produced at a rate of less than a millionth of a gram each year. All these factors make it at best difficult to work with, and at worst impossible to even get hold of. As a result, relatively little is known about einsteinium and its heavy neighbors in the bottom row of the periodic table, which together form the actinides. But Professor Rebecca Abergel, of UC Berkeley’s Department of Nuclear Engineering and Lawrence Berkeley National Lab, is not daunted by these challenges. Abergel works on increasing our fundamental knowledge about these elements, extending UC Berkeley’s long history of heavy element research that involves the discovery of 16 of the man-made elements, including berkelium and californium. 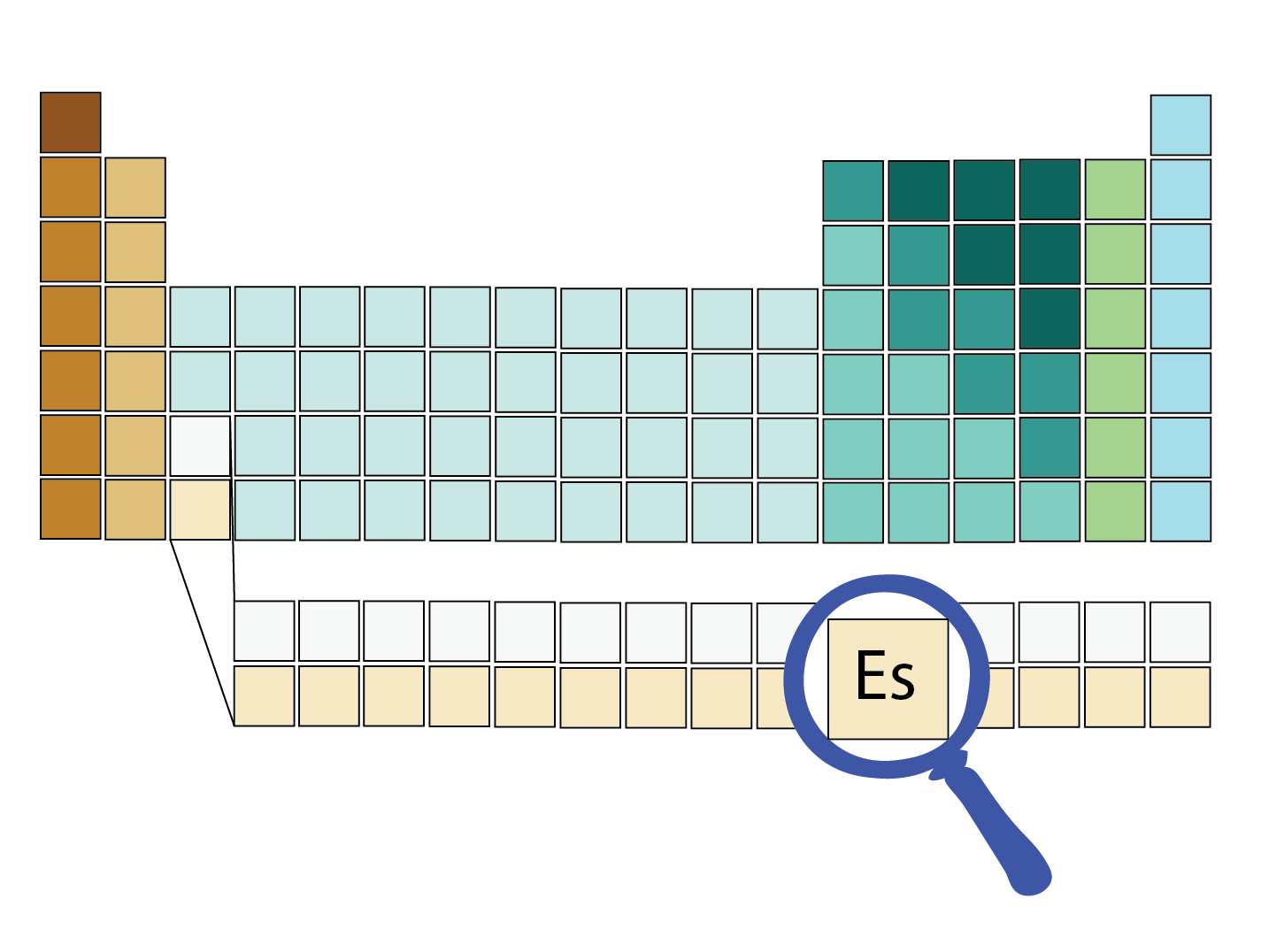 While some elements like carbon and iron are abundant on Earth, many of the heaviest elements in the periodic table are scarce. In fact, some elements are not naturally present on Earth at all. Instead, they’re formed during atomic bomb explosions or made in special reactors where high-energy particles slam together to generate new atoms. All the heavy actinides are also radioactive, which means that their atomic nuclei are unstable, and they are constantly decaying into other elements. Radioactive decay is accompanied by the emission of energetic particles and light rays which are harmful to humans, so actinide researchers like Abergel’s team can work with only small amounts of these elements to keep the radiation dose within safe limits. And since the elements are constantly decaying, the researchers need to work fast before the sample becomes too impure to study. Working with these elements would likely be unnerving for most, but Katherine Shield, a Berkeley graduate student, says, “You just don’t think about how precious the material is when you work with it. You just practice and practice until you can do the procedures perfectly every time.”

Understanding the properties of the actinides and how they bind to different molecules is important to fundamental science, giving us knowledge about some of the heaviest building blocks of our universe. Abergel’s research group works with a team of researchers from across the United States to prepare and investigate molecules made from the actinides bound to other elements, which they call actinide complexes. They synthesize similar molecules made with different actinides and then compare their properties to understand trends in heavy element properties. Previously, the researchers had synthesized actinide complexes including elements up to californium in the periodic table. However, preparing an einsteinium complex for comparison had been out of their reach because their collaborators at Oak Ridge National Lab (ORNL), one of the only places in the world with the capability to make einsteinium, had not created the element for several years prior to this study. But in 2019, ORNL finally began producing some einsteinium—less than a microgram a year—and Abergel’s team was fortunate enough to obtain half of the total amount available that year. But half the total amount available still weighed less than 200 nanograms, an amount that is invisible to the naked eye.

A primary goal of Abergel’s study was to measure the size of einsteinium. Across each row of the periodic table, the atoms tend to get smaller; this is no different for the actinides. One way of measuring the size of an atom is to measure the distance to other atoms bound to it, like the other atoms bound in the actinide complex. Abergel’s team was the first to measure such a distance for einsteinium. When the work was published earlier this year, it caused quite a stir in the chemistry community. It was the first time a bond length had been measured for such a heavy element, and it was a crucial contribution to our understanding of how einsteinium interacts with other elements. Next, Shield says the team also want to work with fermium, the next heaviest element in the periodic table. Their experience working on such tiny scales with einsteinium has prepared Abergel’s team well if they do manage to get hold of fermium. But fermium is even less stable and much, much rarer.

Amy Price is a postdoctoral research associate in chemistry.