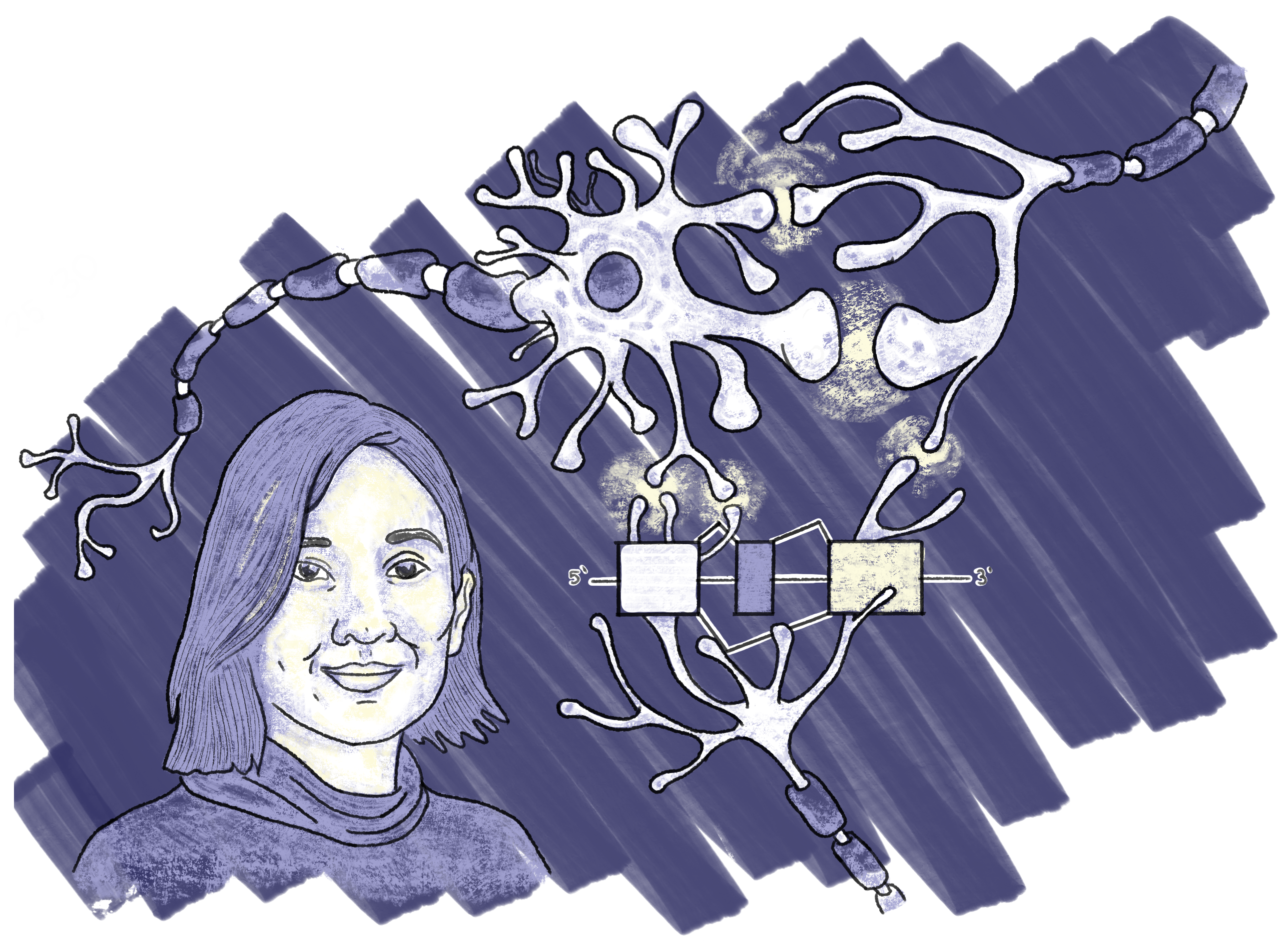 Dr. Andrea Gomez has always been a microbiologist at heart. As a young girl growing up in Las Cruces, New Mexico, she remembers, “I had an affinity for the unseen, for diving deep.” Her love of tiny things powered her through a PhD in developmental genetics at New York University, where she began studying one of the smallest computational units in the brain: synapses. At these junctions between neurons, cells rely on genetic instructions to coordinate a dizzying number of molecular signals to form our neural pathways. As an assistant professor of Molecular and Cell Biology at UC Berkeley, Gomez combines molecular genetics and functional neuroscience to investigate how RNA—molecules that read genetic protein-building instructions—guide dynamic brain development.

Gomez is especially interested in a process called alternative splicing. Genes have both coding and non-coding regions, and before RNA can be used to build proteins from the genetic instructions, the non-coding regions need to be cut, or spliced, out of the gene. Then, the leftover snippets can be pieced together in a multitude of ways, allowing the same genes to be reinterpreted to yield many different proteins.

Alternative splicing in the brain may also play a role in the long-term changes seen in people after taking psychedelics. Emerging research shows that people with treatment-resistant depression experience months-long benefits after a single psychedelic treatment. “There must be changes in the neural network associated with that single event,” Gomez says. “What kinds of large-scale changes in network activity are exhibited during hallucinations? And what molecular fingerprints linger afterwards?” This year, Gomez was named a Rose Hill Innovator, granting her support for new interdisciplinary research in psychedelic science to help answer these questions.

Going forward, Gomez aims to serve a guiding role in the emerging UC Berkeley Center for the Science of Psychedelics (BCSP). Beyond her scientific contributions, she hopes to draw upon her roots and lived experience as a Laguna Pueblo and Chicana woman to center the perspectives of Indigenous communities. Many people assume that psychedelics first emerged in the mid-20th century, but Gomez points out that “this is basically ‘Columbus-izing,’ seizing the history of a very important aspect of Indigenous peoples’ relationship between themselves and the natural world, and of psychedelics in medicinal practice.” Integrating science and spirituality is key to the BCSP’s mission, as Gomez notes: “It’s important to understand things from a sociopolitical perspective.”

Celia Ford is a graduate student in neuroscience.