Only you can prevent… shrubland fires?

In 2001, the United States Forest Service changed Smokey Bear’s campaign from the well-known “only you can prevent forest fires” to “only you can prevent wildfires” in a response to the spread of fires in non-forested areas. But recent research from UC Berkeley highlights the dangerous implications of assuming that all wildfires happen in forests. Kendall Calhoun is a PhD candidate in the Department of Environmental Science, Policy, and Management (ESPM) where he studies the effects of environmental disturbances on ecosystem communities. His research focuses on wildfires, perhaps the most prevalent disturbance to take hold of California today, and the ways our attention has been unfairly skewed toward just one ecosystem: forests.

California can largely be broken down into four ecosystems: conifer forest, hardwood forest, chaparral shrubland, and grassland. But what Calhoun illuminates in his research is that, while most of California’s fire policies were developed for management in conifer forests, that’s not where most fires are burning. 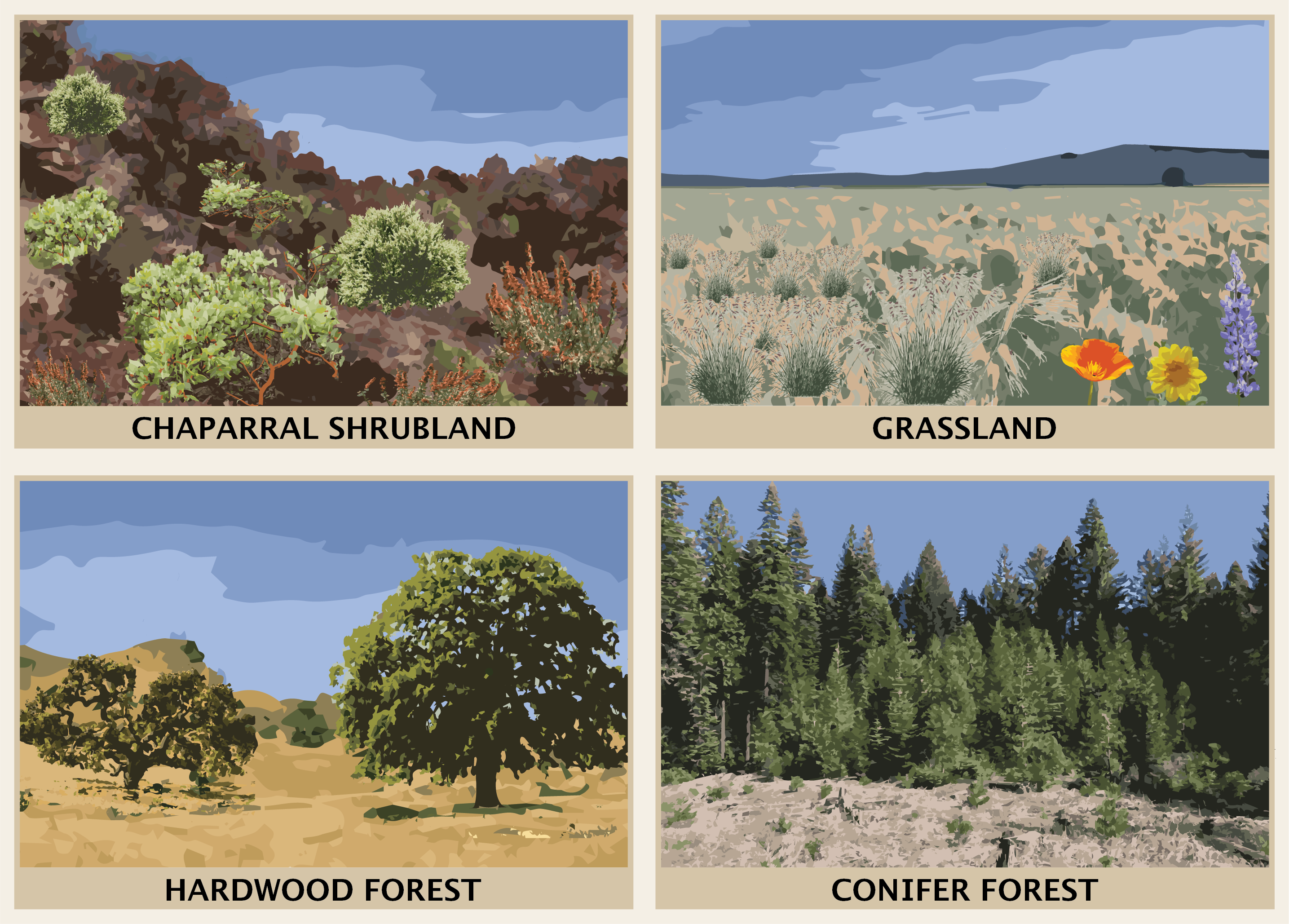 According to the academic papers Calhoun and his team analyzed, 70 percent of research on wildfires in the state as well as 57 percent of media coverage examined conifer forests even though only 36 percent of areas burned in California from 2000-2020 are in conifer forests. What’s even more concerning is that the type of ecosystem that is most likely to burn is in what scientists like Calhoun call the wildland-urban interface, or WUI. The WUI is the zone where unoccupied land meets human development, which is where California has seen much of its recent wildfire devastation.

More fires have been started in the WUI during the last 20 years as building has expanded farther into these areas and homes are at risk of natural and human-made ignitions, like barbecue, car, and structure fires that spread to nearby homes. Calhoun’s research shows that California WUI fires are more likely to be in shrubland than any other ecosystem, including conifer forest. For example, the 2017 Thomas Fire that burned over 200,000 acres in Santa Barbara and Ventura Counties and destroyed over 500 homes in a single night consisted primarily of shrubland. The August Fire Complex of 2020 was often referred to as a forest fire, but it actually burned a mix of land types, not just conifer forest. The Oakland Tunnel Fire of 1991, one of the deadliest and most economically destructive fires in California history, started as a grass fire that quickly spread through densely populated neighborhoods. 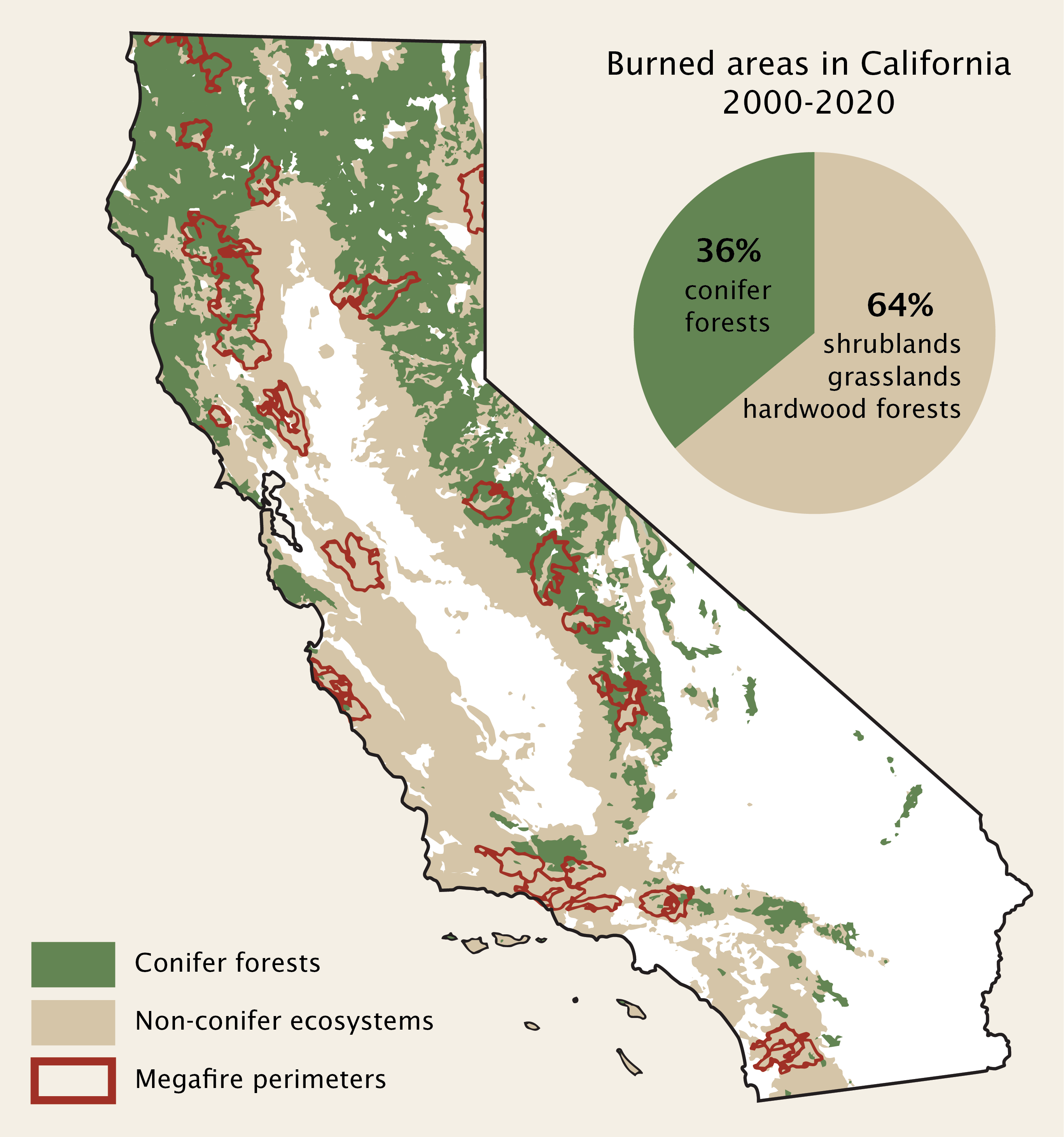 Only 36 percent of burned areas in California from 2000-2020 were in a conifer forest ecosystem. The remaining 64 percent were in non-conifer ecosystems (chaparral shrubland, grassland, or hardwood forest). Megafire perimeters from 2000-2020 are shown overlaid on a map of California labeled by conifer versus non-conifer ecosystem. Illustration is adapted from Figure 1 and Figure 2 of Calhoun et al. (2021). Diversity and Distributions.

This increase in shrubland fires poses a danger to the ecosystem’s rich biodiversity and its human inhabitants because the tools used to manage fires in conifer forests have unintended, potentially negative consequences in shrubland. Calhoun explains that, while practices like prescribed burns and thinning are beneficial to conifer forests, they can be harmful or counterproductive in shrubland. And while we have a natural record of conifer forests through the trees that remain, Calhoun points out that shrubland fires leave nothing behind, making them harder to study. Calhoun also states that there is an urgent need to learn more about how and where these fires are burning so that we can steward the land in the most appropriate ways.

In much of the West, the terms “wildfire” and “forest fire” are often used interchangeably. Even with Smokey’s slogan change, according to Calhoun’s research, this change has yet to take hold in management policies. Calhoun believes that land managers try their best to use the techniques they’ve learned, but as fire ecology is changing, they’re finding that their strategies don’t work as well anymore. So, what does Calhoun suggest about the difference between fire research and the types of fires dominating California today? He argues for a more nuanced, ecosystem-specific approach to managing fires. Research shows that the most effective way to manage fires is through specific approaches tailored to each ecosystem, and for Calhoun, quantifying the problem is just the first step in working toward solutions.

Lauren DeLaunay Miller is a graduate student in journalism