During 2020, the COVID-19 pandemic changed the operations of UC Berkeley beyond recognition. For the bulk of the year, campus was open only to essential workers, with the vast majority of students, faculty and staff being required to work from home. On a global level, similar shifts in working patterns across the world were reflected by the largest drop in greenhouse gas emissions since the Second World War. This leads one to wonder: was a corresponding drop in emissions seen on the UC Berkeley campus? If not, why? And more broadly, as we come out of lockdown and return to (almost) normal life, what lessons have we learned from the last year that can inform our approach to sustainability going forward?

Various activities on campus generate greenhouse gases such as carbon dioxide and methane, which trap heat in the atmosphere and contribute to the warming of the planet. Every year since 2006, UC Berkeley’s Office of Sustainability has compiled an inventory of campus emissions by collecting data from 10 different emission sources on campus. These sources can be categorized into three areas, or “scopes”:

Scope 1 includes emissions sources that generate energy from the burning of fuels on-campus. UC Berkeley’s primary scope 1 source is its cogeneration plant, a complex of boilers that burn natural gas to meet the majority of campus’s heat and electricity needs. Another major source of scope 1 emissions are the buses and other vehicles that make up the campus fleet.

Scope 2 accounts for emissions associated with energy generated off-site that has been purchased by the campus. Currently, UC Berkeley’s biggest source of scope 2 emissions is electricity produced by PG&E.

Scope 3 sources measure indirect emissions associated with the activities of faculty, students, and staff. These are generally the hardest emissions to quantify, as protocols for what sources should be included and how their emissions should be quantified are less standardized compared to scopes 1 and 2.

UC policy requires that all UC schools track scope 3 emissions associated with commutes to and from campus as well as business air travel. But, as Kira Stoll, the director of UC Berkeley’s Office of Sustainability, explains, “Since the inception of our climate program on the Berkeley campus we have also chosen to track [additional] emissions related to our water transport and our sewage as well as emissions from the waste that we send to landfills.”

To compile the inventory, a relevant quantity is collected for each source (e.g. total natural gas combusted in the cogeneration plant, or total amount of water used on campus) and multiplied by its specific emissions factor – a number which converts this type of activity data into a specific quantity of greenhouse gas emitted. If a gas emitted is a greenhouse gas other than CO2 (e.g., methane produced from waste), the activity data is multiplied by both the relevant emission factor along with the gas’ global warming potential, a measure which indicates how much heat the gas traps in comparison to CO2. Once this data is collected and collated, the Sustainability Office then reports emissions information to various outlets, including the Climate Registry and the UC Office of the President.

The methods used by the Sustainability Office to track emissions are standardized, with the same procedures used year-by-year in order to track annual trends and assess whether the campus is meeting its UC-wide reduction targets. “We follow international protocols for tracking these emissions,” Stoll explains. However, she notes that “the pandemic and the shelter in place created a whole other set of circumstances where we had to re-look at some of the methods.”

One significant difficulty was in accurately assessing the campus population for scope 3 emission sources: “it was difficult to know what essential workers were required to be on campus and how many people were really in our buildings, how many were not,” Stoll says. Another methodological difficulty was that records of air travel during 2020 reflected tickets that had been purchased in advance, rather than trips that had actually been taken, making it hard to accurately estimate emissions associated with business air travel. As a result, while most international and domestic air travel was suspended due to travel restrictions, UC Berkeley still saw some emissions associated with business air travel. As Stoll explains, “we couldn’t discern from the data that we had what trips were booked and what trips were actually taken and so we erred on the conservative side in terms of our evaluation of those emissions, assuming more trips than probably really happened in 2020.” 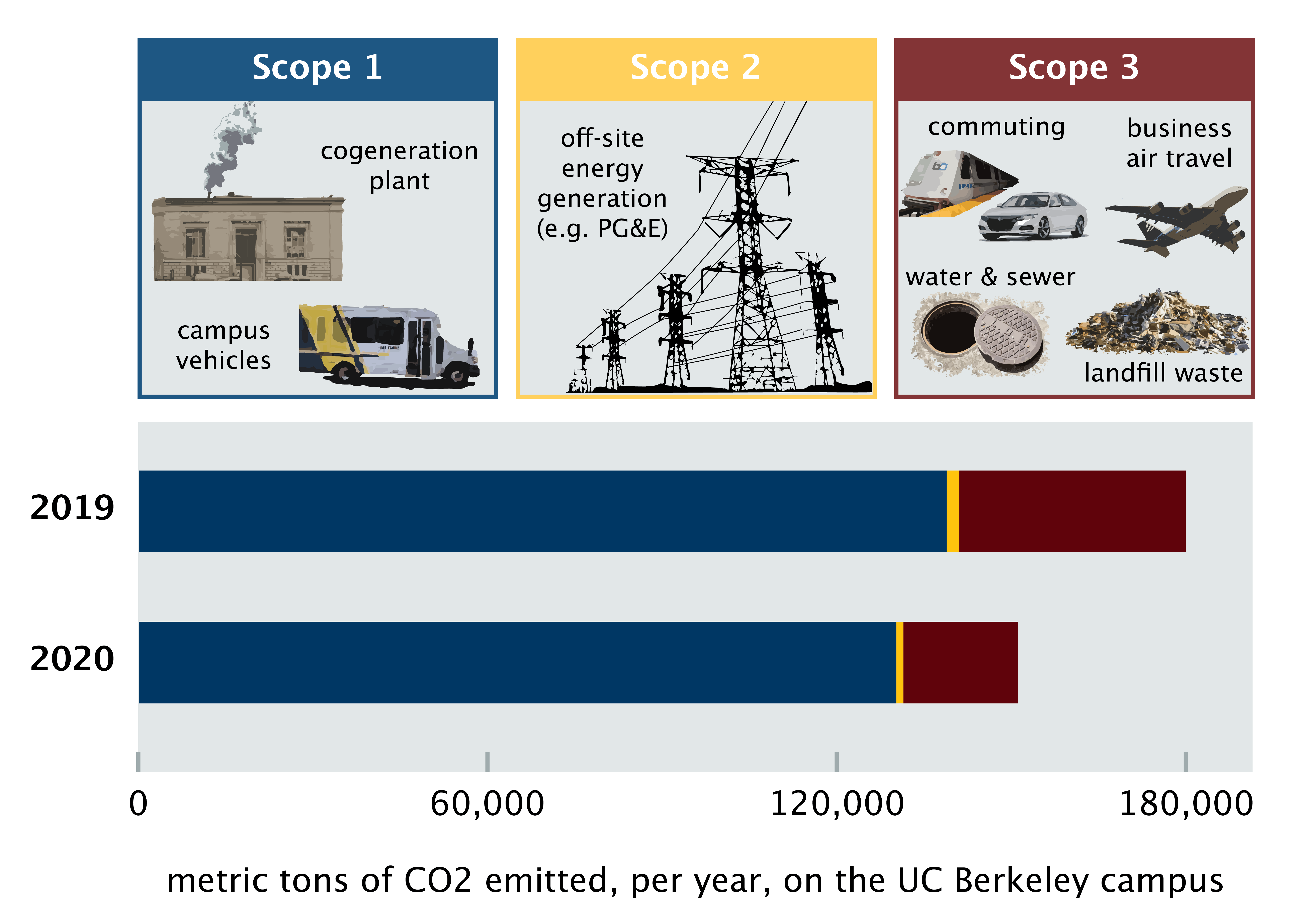 Emissions data for the campus’s 2020 inventory show that while scope 3 emissions were halved compared to 2019, scope 1 emissions (which make up the bulk of Berkeley’s emissions) only decreased by 6%. This means that, across the whole of 2020, the campus’s greenhouse gas emissions only decreased by 17% compared to 2019’s emissions, despite there being significantly fewer students, faculty and staff physically present on campus. “There were assumptions that we would see a pretty significant drop in our usage from those areas because the population of campus was closed, but in fact we saw very little energy use drop,” Stoll says. She cites the primary reason for this as the lack of localized energy controls in buildings. “Generally, while we had far fewer people in our buildings, all of our buildings were up and operating, the heating systems were running, we were running electricity,” she explains. An extenuating factor is the campus’s age: “Because we’re an older campus with a real mix of buildings we only have so much control over the energy floor by floor, room by room.”

The fact that energy use did not decrease in residence halls, despite only being filled to a third of their capacity for the majority of 2020, was a shock to Sam Lubow, the sustainability coordinator for housing and dining on campus. “It was surprising to see how energy usage did not dramatically decrease,” Lubow says. However, she reasons that even if only one person was occupying a two-person room “you might still have the light on the same amount of time.”

Another factor Stoll cites for the higher-than-expected scope 1 emissions was increased energy associated with the increased air filtration and single-air exchanges that were running in campus buildings throughout the pandemic. She explains that “even with buildings being shut down, we were running our energy system throughout the buildings, we were doing more air exchanges for health reasons and we ran our cogeneration plant pretty much at full capacity.”

Rohith Moolakatt, a UC Carbon Neutrality Initiative fellow and representative of the student-led UC Berkeley Green New Deal group, is not surprised by 2020’s emissions data. “I can’t say I’m that shocked by the energy usage not going down that much … I think a lot of the energy goes into campus functioning and a lot of the emissions from the campus are not as much to do with students.”

Some changes not reflected in the emissions data

While the emission numbers might not reflect much of a change, there were still some surprising implications for sustainability during 2020. Lubow, for instance, recalls how moving to an all-takeout and all-disposables model had an unexpected silver lining: “Students understood what went into the compost bin better than ever before - they were starting to sort out their waste better into compostable and landfill and recycling.” Other unexpected upsides of fewer students being on campus included “chefs having more time to experiment with new recipes and develop more plant-forward menus.” For Lubow, the pandemic also made the relationship between sustainability and labor more apparent. For instance, the shift from reusables to disposables across Cal Dining was largely motivated by concerns for the health and safety of dishwashing staff. Current staff shortages have also had implications for sustainability; Lubow notes that “as we’ve been trying to open our dining halls to full capacity, some of our dining rooms haven’t had the labor to staff the dish rooms so we’re on disposables in some places.”

While Stoll acknowledges that there are lessons we can learn from digging deep into 2020’s emissions data, she also stresses the importance of “being judicious on how much time we spend evaluating this oddball year.” One takeaway she identifies is the importance of decreasing energy use in buildings. “We already knew that our buildings didn’t have enough advanced controls, now we know our buildings really need to have advanced controls and that’s being built into how we’re thinking about the future energy system,” she says. Stoll also anticipates the opportunity to capitalize on lasting changes associated with travel habits: “I think that the pandemic offered us a window into how effective we could be with online meetings.” She predicts lower business air travel and fleet emissions, as people Zoom rather than travel for meetings. “I think remote working and reducing travel is part of our future,” she says. This raises questions of future space management on campus, especially if the trend for hybrid or remote work for faculty, students and staff continues on a long-term basis.

Moolakatt, however, argues that the data suggests a need for more radical change. “The root of the problem is that we have infrastructure which is still polluting,” he says. He and other members of the UC Berkeley Green New Deal would like to see the aging cogeneration plant completely phased out of use, stating “we don’t want any more methane to be burned, or the cogeneration plant to be in function at all, that’s what we want, that’s what we’re pushing for.” Moolakatt is also skeptical of the UC Office of the President’s target for UC Berkeley to be carbon neutral in scopes 1 and 2 by 2025, a goal he thinks will only be achievable through the purchase of carbon offsets. He argues that a better aim would be for the university to go entirely fossil-fuel-free by 2025: “I don’t think that’s a realistic goal, but that’s something we should be demanding.”

Lubow found one positive aspect of the pandemic to be that it highlighted the campus’ dedication to sustainability. “I was worried that sustainability would take a backseat during the pandemic but folks are still asking the right questions,” says Lubow. Despite the challenges of the past year, she notes bright spots that “gave us the opportunity to see what we were doing better” and was also inspired by how quick the university was to adapt: “as soon as it was clear that [the coronavirus] wasn’t on surfaces, folks were ready to bring their reusable bags back and reusable mugs back, there was less of a learning curve than I expected.”

Thus, despite seeing a smaller drop in emissions than expected, the pandemic has given us insights into the adjustments needed to transition to a more sustainable campus, and demonstrated the willingness of students, faculty and staff to get there.

Leela Velautham is a graduate student in education