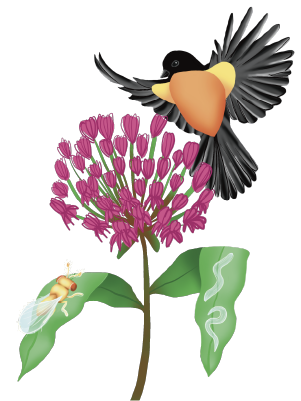 Many poisons protect plants from being devoured by insects, including manmade insecticides and natural toxins produced by plants themselves. One example is the milkweed plant, which produces a toxin known as a cardiac glycoside that disrupts a cellular pump important in animal hearts. While deadly to many animals, several insects, such as the monarch butterfly, have evolved defenses against this toxin. Milkweed-eating insects have mutations in this cellular pump that render the toxin ineffective. Consequently, monarchs can harbor the cardiac glycoside in their bodies for their own defense.

Despite their toxin hoarding, monarchs are still prey to predators and parasites. Recently, UC Berkeley Professor of Integrative Biology Noah Whiteman and UC Riverside Professor of Evolutionary Systems Biology Simon “Niels” Groen found that four species that prey on monarchs—a mouse, a bird, a parasitic wasp, and a worm—all carry mutations in the cellular pump like the monarch. This finding is the first example of a predator or parasite evolving in response to the diet of the animal it consumes. Not only that, but they are the first four distinct examples, showing the power of a plant toxin in shaping an ecosystem.

The evolutionary potency of plant toxins raises questions about how insecticides used in modern agriculture affect ecosystems. “We know more and more about resistance in insects to natural and manmade toxins,” Groen mentioned, “but we still don’t know much about how the predators and parasites of these insects deal with these toxins.” Currently, the data are lacking to evaluate these impacts, but other toxins, including manmade ones, could be shaping the evolution of species beyond the insects they target.

Anna Rogers is a graduate student in molecular and cell biology